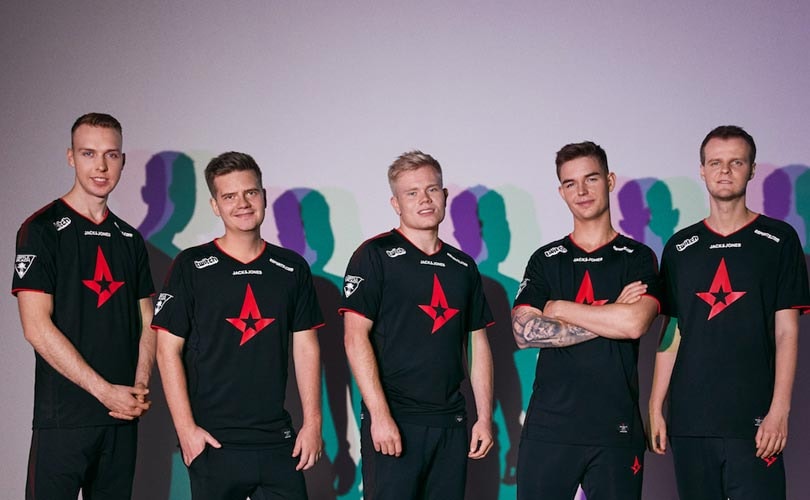 The new players jersey is the result of a close collaboration between JACK & JONES and the Astralis players and will be the new official player jersey for the coming season. It is launched together with a wider collection of different Astralis branded styles.

Last year in November, the first ever performance optimized esports jersey was launched by JACK & JONES and Astralis. The design collaboration received massive attention and culminated a few weeks after the release, as the jersey was completely sold out on jackjones.com/astralis. JACK & JONES was one of the first non-endemic brands to form a partnership with an esports team and looking back, the collaboration has benefitted the brand in several ways. Henning Nielsen, JACK & JONES, elaborates:

“Having collaborated with Astralis throughout the past year, we have witnessed the huge potential of the esports industry.
A lot has happened during the past year, and we’ve seen that esports has become more and more popular. Our partnership has benefitted our brand on a commercial level, but also the fact that the collaboration has boosted our brand awareness across a complex target group. We are very proud of collaborating with the world’s number one CS:GO team and we look very much forward to seeing the potential unfold even more in the coming years.“

The partnership between Astralis and JACK & JONES is based on a close collaboration and an authentic approach to creating meaningful, commercial and engaging content.

The new player jersey has been developed by the Astralis players and a team of JACK & JONES designers. The players have contributed with their input on how they wish to appear on stage, as well as input on the fit and how small tweaks can optimize their performance on stage. Nicolai Reedtz (dev1ce) explains:

“The new player jersey looks different from last year’s version. It is much cleaner, and we’ve cut out all the grey areas that were on the last one. Using fewer elements and the black colour as the only background colour emphasizes the red star on the chest and creates a strong look. We’ve added stripes on the shoulders and down the side seams to create a cool 3D effect. The red and black colours blend when you move - it’s a really cool effect.”

The player jersey is filled with technical features engineered to accommodate the players’ needs in terms of comfort and performance. Cecilia Lavender, Design Manager at JACK & JONES, elaborates:

“We’ve added mesh on some of the key spots on the jersey to secure better ventilation and breathability. Moreover, we’ve constructed the jersey to secure minimum distraction from seams. The engineered flat seams are placed strategically to avoid the area below the underarm – an important feature when in gaming position“.

To add up to the official players, JACK & JONES and Astralis have also developed a collection of other styles, branded with the red Astralis star. Besides the new player jersey in a short-sleeve and long-sleeve version, the collection consists of:

The entire collection is released during a huge fan event in Fields, Copenhagen on 1 November at 15.30. The event is co-hosted by JACK & JONES and Astralis.

JACK & JONES was founded as a jeanswear brand in Denmark in 1990. From small beginnings, the brand has evolved and is now the largest business unit in the BESTSELLER A/S group – and is, with its 1000+ stores, the biggest menswear retailer in Europe. The brand has offices around the world, and in the Denmark-based head office, 400 employees work with design, buying, sales and marketing.

Jeans and jeanswear are the core business of the JACK & JONES brand, however the product portfolio also covers tailoring, urban sportswear, footwear and accessories.JACK & JONES offers several collections throughout the year. With jeans as the focal point, JACK & JONES develops collections covering all occasions and fashion trend needs of young men. In 2017 JACK & JONES introduced a plus size range and in early 2018 the brand expanded its size range further with sizes for the younger consumers aged 8-16.

Having won the latest Major in London and leading the World Rankings for most of 2018, Astralis is the world’s number 1 Counter-Strike team. With just above 2.5 million followers across the team’s and the players’ social media channels, the Danish based esports organization is amongst the world’s most popular Counter-Strike brands. In 2018 the team has won 7 major tournaments: The FACEIT Major in London, BLAST Pro Series Istanbul, ELEAGUE Premier in Atlanta, ECS Finals in Atlanta, ESL Pro League Finals in Dallas and Dreamhack Masters in Marseille.

The Copenhagen based company, RFRSH Entertainment (Est. 2016)is an esports entertainment and media production house who runs the commercial management and performance optimization for Astralis.